PAX: What to prepare for as an indie?

With PAX South around the corner, today I’d like to talk about what we, as an independent studio, go through before an event of this scale. What goes behind the scenes, what kind of preparation is needed, things like that.

This will be our third PAX under the Bishop Games banner and our second time at South specifically. Along the way, we have acquired a few tips and tricks on how to prepare for a convention like PAX and what to aim for.

From my own experience, here is a list of four things that an indie studio should focus on.

This may seem obvious, but hear me out. You’re an exhibitor, and as such, you present your game to thousands of people. The thing is… you’re indirectly competing with all the other exhibitors for the people’s attention and time. PAX is only 3 days and there are hundreds of games to see and thousands of things to do. Your game needs to be on point, you have to stand out.

To do so doesn’t necessarily mean to showcase the most recent version of your game (if the game is still in development). It is better to be safe than sorry and go with an older build that may be less polished but is 100% bug-free. It can be quite embarrassing and problematic to find out that your new build is full of bugs and inconsistencies in front of thousands of people. There’s no time to fix things once you’re there, it’s too late.

It’s also primordial to adapt the length of your build specifically for PAX. As I said, people have a lot of stuff to visit and not a lot of time to spend on your game. The experience you offer to the audience needs to be fast-paced, attracting and easy to pick up. People have no time to learn this advanced mechanic that takes an hour to master, they want to test your game for 10 minutes top, and if they liked the experience, they will come back for more. TL;DR, you need a tailor-made experience that suits PAX’s audience. Short and sweet is key. 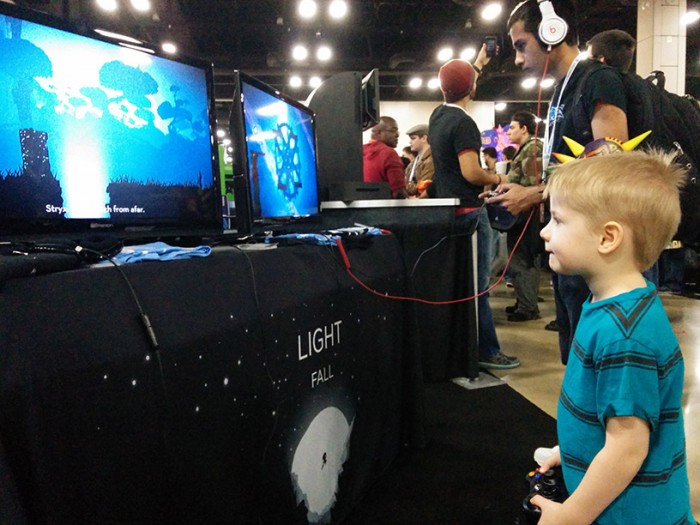 Throwback to the first edition of PAX South.

If you want the best ROI (return of investment) from your PAX, media exposure is obviously one of the key factors. You never have enough exposure. You want your game out there as much as possible to generate hype for the release.

As if attracting fans to your booth wasn’t hard enough, you also need to lure the media. This can be a daunting task, especially when competing with bigger companies such as Blizzard, Riot Games, EA, Ubisoft, etc., but it is doable.

First of all, the members of the media like to be contacted ahead of time. They have to plan their schedule, and like the fans, they have many things to see and talk about. Contact them as soon as the media list is available. Be original and creative, sell not only your game but your story. Example, instead of writing ”Come test out Light Fall, an immersive platformer…zzzzzzzzz”, write something like ”Up in the cold North of Canada, three young gamers dared the impossible; revolutionize the platforming genre with their game Light Fall…” You get the drift?

Also, it is better to scout the media and contact those who share a similar audience. I mean, contacting a media dedicated to World of Warcraft and invite them to check out Light Fall will probably not get me a reply…

Finally, my personal advice is to have a playing station reserved to the media. If, by chance, a media runs into your booth without an appointment and all the stations are busy, you are in a lose-lose situation. You can’t just make this guy wait in line but it’s also plain rude to make him bypass everyone waiting. The solution is to have a laptop on the other side of the booth, away from the crowd. This way, the guy can test your game in peace and asks questions at the same time. 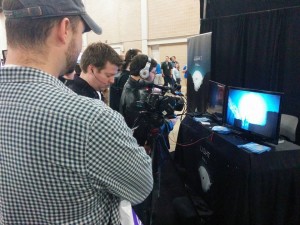 Back at South last year, we made IGN.com’s frontpage. Here they were filming for their video.

Now, you thought the work was over? Hell no. Your booth also has to be sharp to attract the horde of fans wandering through the convention. You need promotional material; posters, media-rollers, huge TV screens, gifts for the fans, anything that you can think of to attract the eye and grab the interest of the passerby.

And you need to do it on a limited budget (well if you’re indie). Let’s be honest here, you can’t afford a 100 000$ booth like the big ones, but with creativity you can go a long way with a small amount of money. 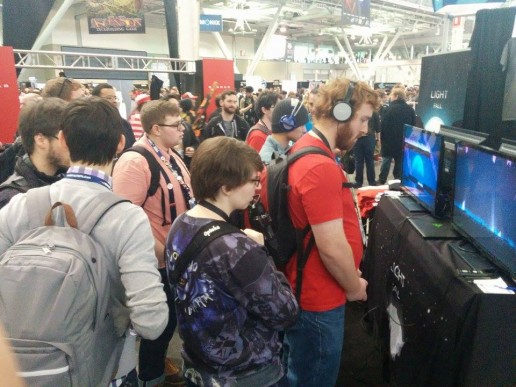 Attracting a huge crowd to your booth is beneficial. It makes other people stop and wonder what everyone is looking at. 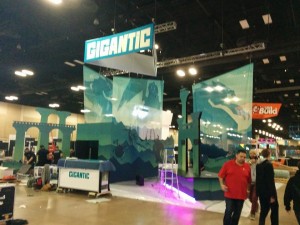 As an indie, you can’t compete with things like this… but you can find ways to have a cool booth nonetheless.

Self-explanatory. You need to book flight tickets, a hotel and all that good stuff. And you need to do it fast. As soon as your presence to PAX is confirmed, in fact. The longer you wait, the higher the prices will be in that area. Hotels will be booked out, flight tickets will only get more expensive… it can be a nightmare (trust me on this).

There are also life-savers, small things or behaviors that we often don’t think about but that can greatly enhance your PAX experience.

An extra pair of shoes goes a long way and your feet will thank you forever. Standing up all day around the booth, walking to the convention center and back to the hotel… your feet will hurt, a lot. It’s a good idea to bring a second pair of shoes because after the first day your soles will be completely flat. Switching shoes every day will allow your soles to get back to their initial form and absorb most of the weight resulting in less pain.

An extra computer is also a must. Technology never breaks… until it breaks at the worst possible moment. Get an extra of everything (screen, laptop, controller, etc.). You don’t want to have to run around a city you don’t know to buy stuff at the last minute.

Wash your hands frequently. You meet hundreds of people in your weekend. You talk and shake hands all the time. It is incredibly easy to catch a cold or a virus at a convention. Be cautious about your health. Same goes for your voice. There is a lot of noise, people are screaming, the volume of the games is through the roof… To be heard you need to speak loudly. Take breaks if needed and alternate between team members so you can rest your voice and your vocal cords.

Get a cellphone plan for the area (if you’re outside the US). At least one of you should get a temporary cellphone data and voice plan for the event. Someone can get lost or you may need the 3G for something urgent (don’t rely on the free one provided at the event, it is overcrowded and can barely load a page in 10 minutes). It’s worth the cost.

Finally, get a travel insurance (if you’re outside the US). You never know what can happen and you don’t want to pay for a hospital bill in the US… Most travel insurance are pretty cheap if you’re relatively healthy. We had one for 80 bucks that lasted us a year.

Hope you enjoyed the read! Talk to you after PAX. We’ll do a Post-Mortem post and an update on where the development is at (great news ahead)!
-BEN