Hey everyone! First of all, we know we have been pretty quiet about the game for the past few months. It was an uncharacteristic behavior from us, as we usually try to keep the updates rolling every month or so. We’d like to apologize for the radio silence, but rest assured that it’s not because Light Fall is in jeopardy or anything of the sort. In fact, we have been quite busy with Light Fall!

We were working on so many different things at once that we didn’t have anything conclusive to reveal. But today, we’re ready to talk about several of these things. We also have news concerning the Kickstarter In-Game Rewards. You can read more about that in this Kickstarter update.

Pushing the Immersion One Step Further

Light Fall is all about immersion. We want our players to experience an emotional journey. We want them to travel to the mysterious world of Numbra and totally immerse themselves. That’s why the two core points of Light Fall have been designed for this very purpose.

Firstly, we have created the Shadow Core; a game mechanic that allows you to do as you please and explore as you want. In some way, the Shadow Core gives the players access to ultimate freedom. Secondly, we have developed an intriguing story, delivered by the grumpy narrator Stryx. The story and gameplay are both united in their immersive purpose. But we weren’t satisfied yet. 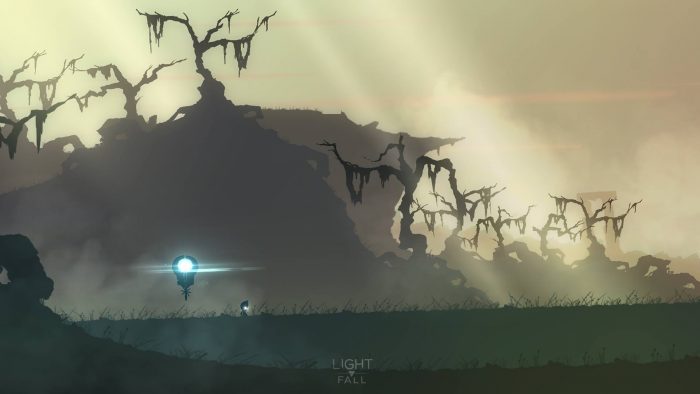 Light Fall has always been aesthetically pleasing. Now it feels alive as well.

We went one step further and made the game itself feel much more immersive in its audio and visual aspects. The world of Light Fall has always been beautiful, but we wanted it to feel alive. Our goal has always been to make it react to the player. That’s why we have added multiple animations and interactions in the levels. Below are some examples of this new immersive world.

For the past months, we have also been working with Peak Media, an agency based locally. While Peak had mostly worked on films before, they were very excited about getting their feet wet in the video game industry. As such, they jumped at this opportunity and have decided to help us with the sounds of Light Fall. The in-game sounds are now much more professional and impactful. You can hear a few of them below.
We are very happy with the results so far and we believe these changes, when applied to the whole game, will make Light Fall much better.

Ironing Out the Last Details of Light Fall

Looking at the big picture, we are currently ironing out the last details for our complete alpha of the game. It means that, soon enough, we will be able to play the entire game from beginning to end. That also includes every cut scene, NPC and puzzle.

Last time we spoke, we said that we were working on the bosses of Light Fall. It’s with excitement that we announce that the bosses will be complete killers! Each boss brings its unique challenge and we can’t wait for you guys to face them.

For the cut scenes, we’ve also been working with the Sequence Group, based in Vancouver. With their expertise, we were able to plan the in-game cut scenes better and make them more appealing both aesthetically and story-wise.

All in all, Light Fall is progressing nicely! Right now our priority remains our Alpha version of the game, but soon enough we will start working on the console ports as well. Stay tuned as we get closer and closer to release!
-BEN