TwitchCon: I Thought I Knew Twitch, But I Didn’t

I hope you’re all doing well. For my part, I feel lovely! After spending 5 days in the beautiful and sunny San Diego, it is hard not to.

I wanted to write my recap on TwitchCon as soon as possible, while my memories of the event were still fresh in mind. There are many things to discuss when it comes to TwitchCon, but what I want to talk about is how clueless I really was about Twitch and its community in general. Don’t get me wrong, I am a user of Twitch and have been for a few years. Like you guys, I watch my favorite video game events, e-Sports competitions and my favorite streamers. I’d dare say I’m well familiar with Twitch, even. The truth is that after attending my first edition of TwitchCon, I came to the conclusion that I thought I knew and understood Twitch, but in fact I absolutely didn’t. 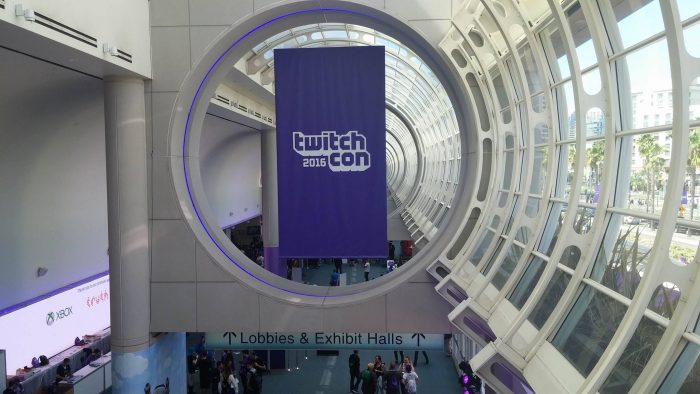 Welcome to TwitchCon, where memes and dreams come to life.

Look, I’ve been to several PAX and other big video game conventions in my life. And I’m not saying there were more people at TwitchCon than at PAX East. In fact, I don’t know the official numbers and they are unimportant for the matter at hand. At a convention like PAX, you can expect a huge audience to show up because this is an event that celebrates the entire video game industry. From the indies to the AAA’s, from the publishers to the streamers, everyone attends PAX. But for TwitchCon? Twitch is just a community (albeit the largest one) inside video games. It is a fraction of the industry, or so I thought. Boy, was I wrong. This event was quite eye-opening for me, I was surprised by the sheer number of people attending. Twitch is part of gaming now and it is here to stay. Every gamer nowadays is familiar with Twitch, no matter the type of game he plays or the platform he uses. And that’s a good thing. 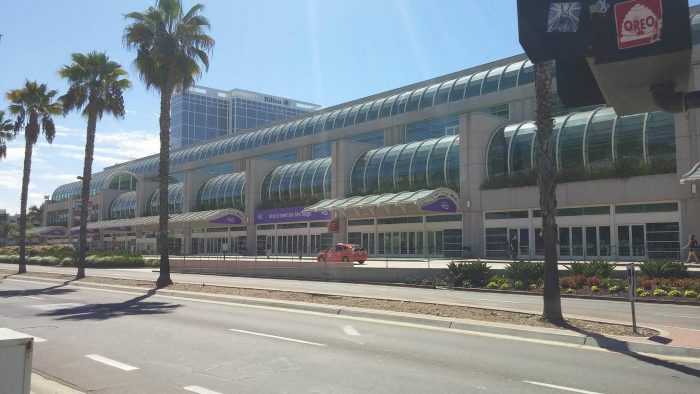 The San Diego Convention Center, home of TwitchCon 2016, was at full capacity. 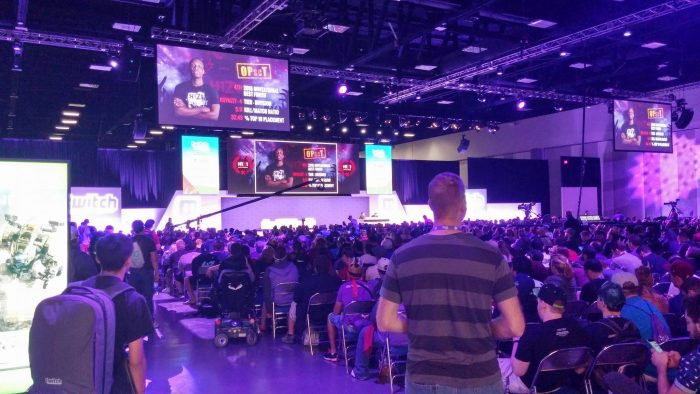 The Kappa Theater, one of the many showrooms at TwitchCon 2016.

Twitch is just a by-product of gaming. Wrong.

I always thought Twitch was just a by-product of gaming. I initially put it on the same level as voice-chat programs, some sort of secondary tool for gamers. Boy, was I wrong. The truth is, Twitch brings gaming to another level. Really, the longer Twitch stays around, the better it is for gaming. It makes the experience both for the viewer and the streamer better. It was a big factor in making video games mainstream. Streamers can now easily showcase their skills and personality to a large audience and viewers have an easy way to watch content online.

Of course, I’m not saying Twitch is perfect. We’ve all heard about the horror stories; the bullying, the police raids, etc. But these examples are a water drop in the sea of interactions on Twitch, which for the most part, are positives for everyone involved. 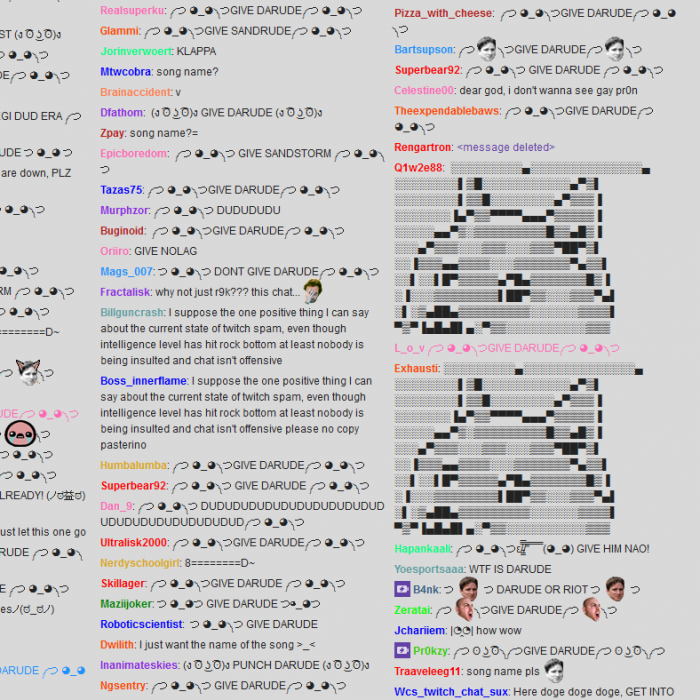 Despite the overused memes, Twitch chat is a powerful tool that makes watching or playing games more interesting.

Twitch is also so prominent among the community that game developers have started to integrate Twitch features in their games. Shardbound and Streamline are two examples of games that are made with a stream-first mentality. There are several ways to include the viewers in a game, these are called Stream First tenets by Twitch:

As you can see, a game experience can change drastically with Twitch. The viewer is now involved in the process, he can participate and engage with his favorite streamer. And this brings me to my last eye-opening realization.

I thought for the longest time that Twitch was just about watching people play games. Boy, was I wrong. Twitch is beyond the scope of gaming. It’s much more than that. First and foremost, it is about social interactions. It’s a mean for people to connect with others. I realized this when I walked in the lobby hall the first day. Seeing people that had never met at all (in real life or online) hug each other and start talking like good friends was a bit of a shock. People connected so easily with each other, all they needed was an interaction about their favorite streamer or their favorite content to watch.

I was also surprised by the amount of love the popular streamers received. I attended some of these ”Meet and Greet” reunions and some streamers were receiving cookies, t-shirts and all kind of crazy stuff from their most faithful fans. And thinking about it, why would they not? If you watch someone every evening, he is part of your life even though you have never met him in the flesh.

I also found out that there is a big audience on Twitch that is not watching game-related content at all. Some people have a cooking channel or a painting channel. You can watch pretty much anything on Twitch, it is quickly replacing television.

The bottom line is that the viewers on Twitch watch for different reasons: some are seeking attention (donation message and shoutouts), some are looking to interact and chill with others (Twitch chat), some are simply enjoying watching their favorite games or e-Sports competitions and some are watching pro players to improve their own play. And that’s the beauty of Twitch, everyone is benefiting from it. Each and every streamer has his own channel’s theme and way of streaming, and the same can be said for viewers and their watching habits. 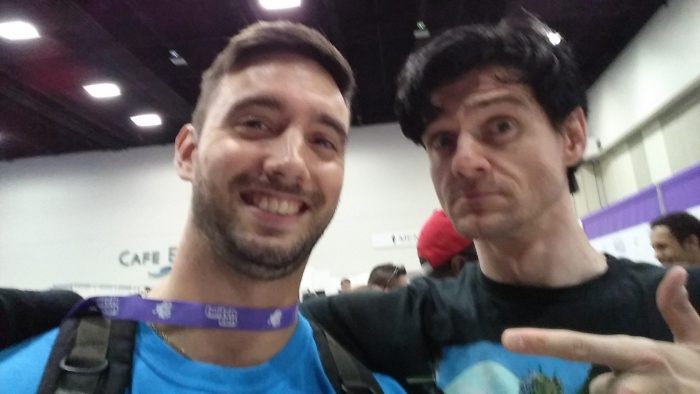 MANvsGAME, a popular streamer, has built his channel around struggling and beating every video game he can get his hands on. 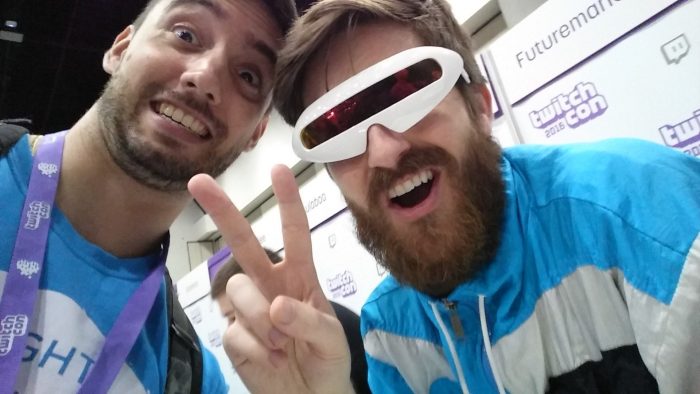 Some streamers, like FuturemanGaming, have a very recognizable element to stand out from the crowd. 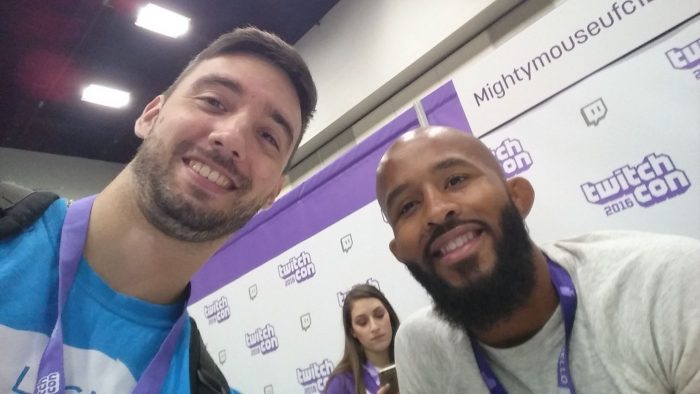 Twitch brings together a very diverse crowd. Even the UFC champion Demetrious Johnson can be seen streaming regularly.

To conclude, I really enjoyed my time at TwitchCon 2016 and as a game developer, I truly understood what this platform was all about.

That’s it for now, stay tuned as we will have a big announcement about Light Fall in a week or two.