Hey guys, it’s been some time since our last update on the blog.

Fear not! It’s not that we’ve stopped posting online, far from it. Recently, we’ve been trying a new approach for our social media posts. Two months ago, we have created a Medium account under the studio’s name and have started posting there regularly on different topics about our activities and the game.

First of all, Medium will not replace this blog. Our blog has been running since day 1 and we intend to keep it that way. Then, you may ask, why post on Medium? Well, Medium is mostly about education, learning and sharing. As game devs, we have been asked often times by fans, family and friends to describe our everyday life. Questions like ”How did you come up with this idea for Light Fall?” or ”How do you manage to pay for your expenses while starting a studio?” have been asked many, many times.

As such, Medium is the perfect platform to share this kind of stuff with others. Our blog, and our Kickstarter page for that matter, will remain focused on Light Fall and the important decisions we take at the studio. Medium, on the other hand, will touch on many different subjects related to video games at large. So if game development has always interested you, feel free to go there to discuss and interact with us.

You can read the topics we’ve talked about right below:
TwitchCon: I Thought I Knew Twitch, But I Didn’t
The Importance of Colors in Game Design
Build a Coherent Game Universe
Our Game Studio’s Road to Success
Story vs Gameplay: How We Did It
5 Life-Savers For Your First Expo

Using Medium not only is fun, but it also allows us to reach a new crowd of people. We share our stories and our knowledge with the public, and in doing so, some of them develop an interest in the game and decide to follow us. It’s a win-win situation for us and so far we have enjoyed it a lot! We’ve already seen the positive impact of Medium on the growth of our social media’s followers.

So far, we have been very pleased about this new approach: 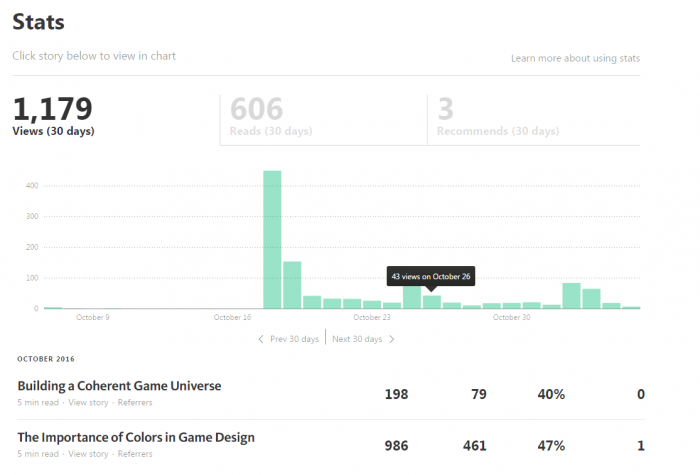 Our humble beginnings on Medium. It has been fun to share our stories with the public. 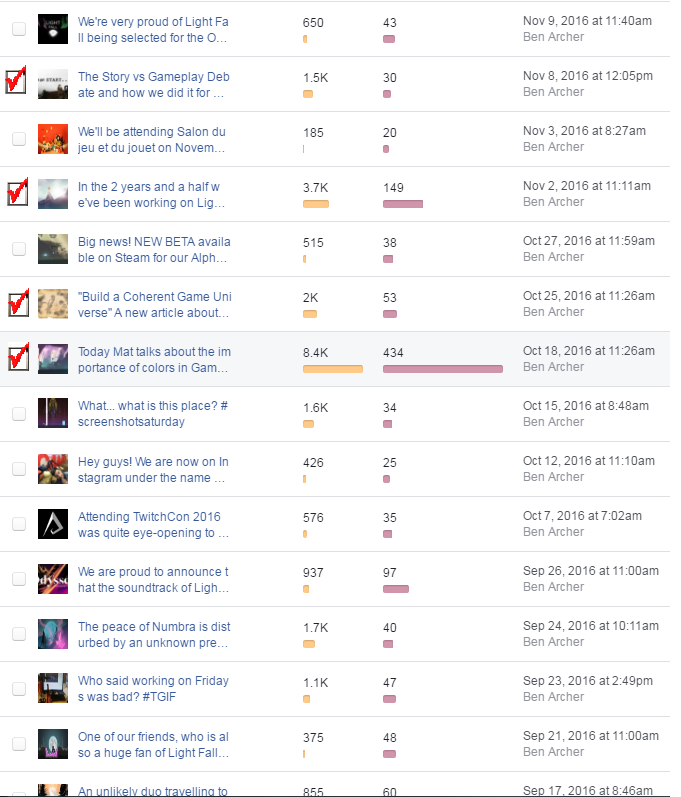 The Medium posts have helped grow our followers base on other platforms as well.

As for Light Fall, we’re currently finalizing the last steps of our beta. Right now, we are working on the bosses of the game! We are all very excited about that and we’ll do everything in our power so they live up to your expectations! While we can’t reveal too much right now, we still have a little something for you today. Right below, the Lair of Animus… an underwater cavern hidden beneath the Lost Lagoon! This is where you will encounter the first boss of the game… Enjoy! 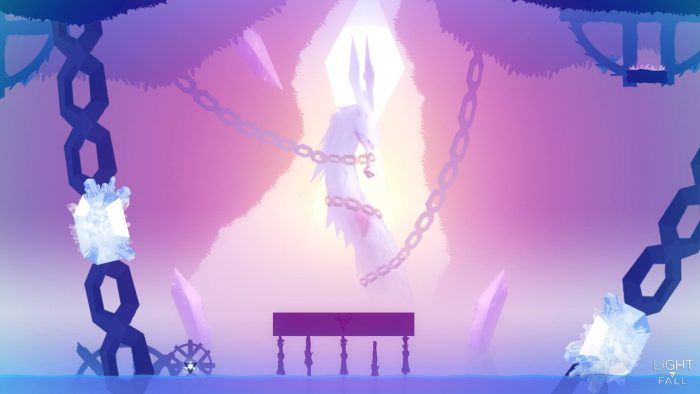 What has happened to Animus the Wise? Find out soon…

In categories Casual, Talking with no comments

Hey everyone, today we have a new guy in town to introduce! Please welcome Ben Corriveau, the newest employee at the studio. You read that right, we now have 2 Bens on board… our success is now guaranteed.

On a serious note, Ben joins the team as a full-time employee and as the second programmer of the studio. He will help us realize our vision of Light Fall and make it a great game. We are very excited about having Ben on the team, we share a common vision and philosophy when it comes to making games. 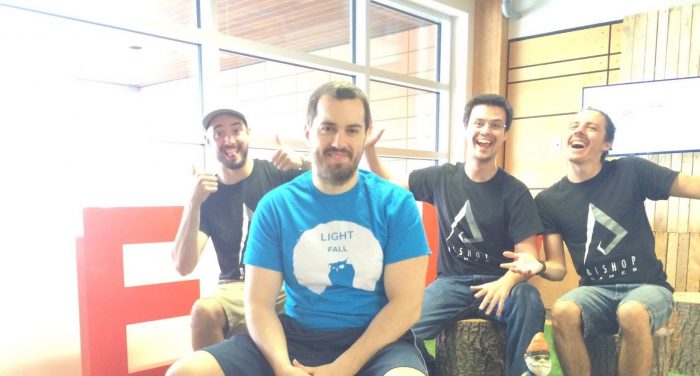 In his brand new and shiny Light Fall shirt, Ben Corriveau will help us in making Light Fall an amazing game.

Here’s a short interview in which Ben introduces himself to you all. Have a good read!

I was living in Drummondville with my family. I completed an accounting degree and worked in this field for two years. Then, I realized I wanted to do something else in life. I completed a short course in programming, something I already did as a part-time hobby. This led me to work at Frima Studio in Quebec for one year, then I joined the guys.

I already knew David beforehand, as he was my teacher at Bart College, the place where I took my course. I also briefly worked on Light Fall before joining Frima, a year ago. So I had already met the guys. As for officially joining the team, David offered me the job around a beer and I quickly accepted!

It feels awesome! I had already backed the game’s Kickstarter last year and now I’m working on it full-time… Quite the funny situation. The guys also seem really laid back and fun to work with so far. It’s really different working on your own IP (intellectual property) than doing servicing contracts for other clients. We have much more freedom and we just try our best to make a fun and exciting game instead of doing exactly what the client demands.

All-time: Bad Company 2, Guild Wars (1), Halo 2-4. Recently: Destiny, Salt and Sanctuary, Ori and the Blind Forest. I mostly enjoy FPS and platformers, with some RPGs from time to time.

I can’t choose between poutine and pad thai!!!

Obviously awesome! Although, it’s sometimes confusing when someone simply says ‘Ben’. We have to work something out I guess, but it’s a small price to pay for all the awesomeness it brings!

In categories Casual, Programming, Talking with no comments

By Mathieu Robillard
with no comments

Hello everyone. This devlog post is not written by your usual suspect Ben, but by myself, Mat.

I decided to write a quick recollection of my thoughts and a short recap of my experience at the Stunfest 2016, that took place last week in Rennes, France.

My journey or how to introduce oneself to a new country

Last week, I attended the 2016 edition of Stunfest in Rennes, France, leaving my proud Bishop compatriots behind. My first mission was simple: to make new friends to replace them of course! It was the first time we presented Light Fall in Europe, and man, what a first time. I was travelling with Louis Leclerc from Pixel Quebec so at least I was in good company! 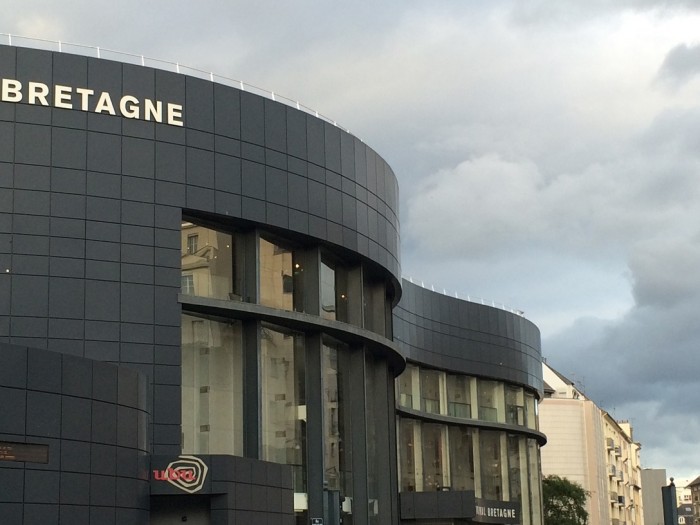 The first dive
To start things in full force, I had to give a lecture on the first day in front of hundreds of game developers. The topic was on independent game development but also on our own experience at Bishop Games and how things are in Quebec, Canada. Obviously, the best way to grab everyone’s attention is to start strong. What else than a broken Powerpoint to do so? It was a stressful first minute but overall it went quite well. It allowed me to introduce myself to all the other exhibitors out there and break the ice in a funny way. At least people remembered me easily as ”the guy who fails at Powerpoint”! 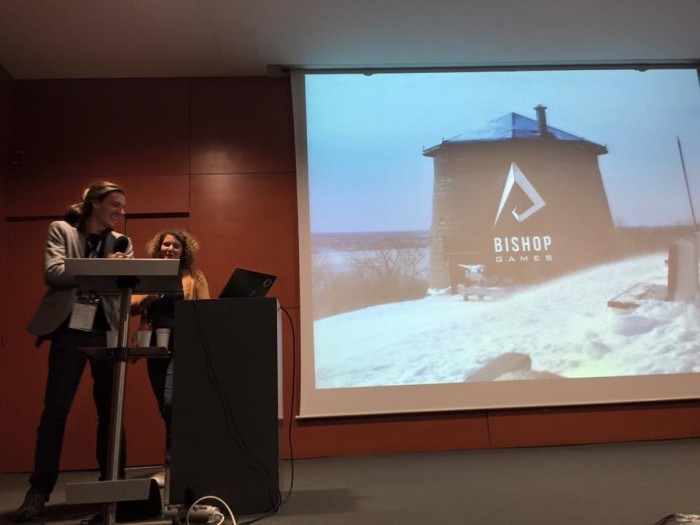 The leap of faith
The start of the exhibition! Ah, the Stunfest… a retro-arcade-indie game festival who brings forward everything we love in the video game culture. An outstanding and unique event! Armed with my laptop and a boatload of business cards, I was ready to showcase Light Fall to the European public: French, Swiss, Belgian and many more were at the rendez-vous. Three days of exhibition starting from 10 AM to 3 AM… Wait what?! Yeah, you read that right, it isn’t a typo. As a wise sage once said: sleep is for the weak… 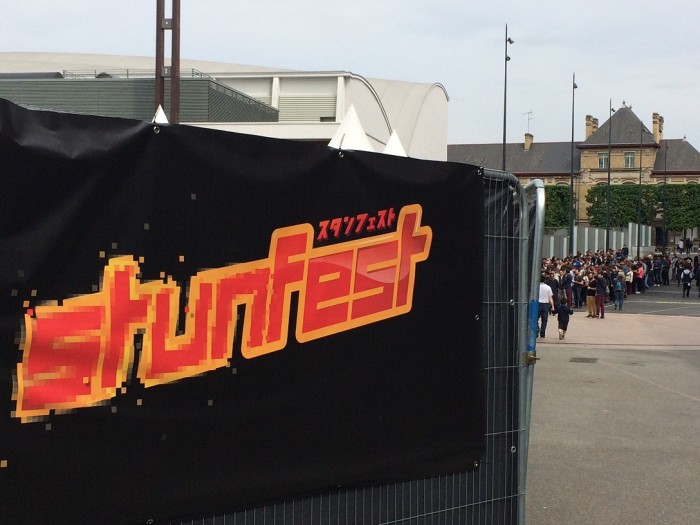 Seducing the French people
Quite the task, but I had some help. A rumor went by that some stranger from over the sea, living in the cold North of Canada, was in town. My French accent from Quebec, which is nothing like the one in France, was enough proof. People came by just to hear me speak sometimes…
Moreover, the Stunfest and the other indies in general were extremely generous. Light Fall received a lot of exposure: trailer showcase on the ‘Grande Place’ in front of thousands of people, public speed runs, a full-page in the event’s promotional pamphlet, etc. I was lucky enough to meet the gamers, the media and the press, as well as lots of speed runners during the days I spent there. 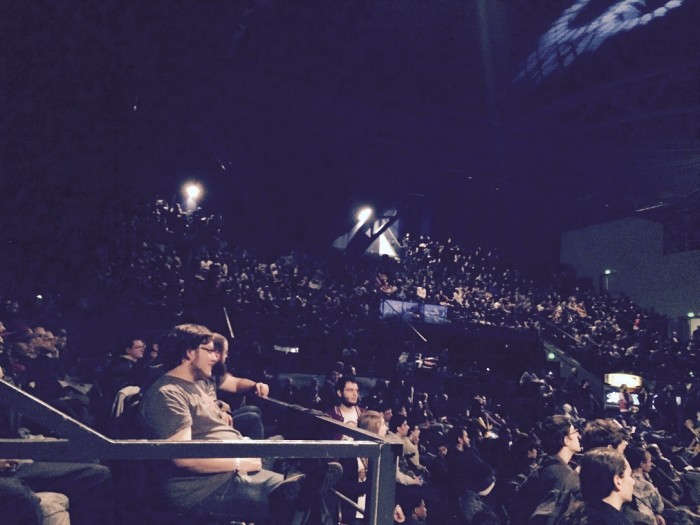 France: the home of Speed run
What attracted that many speed runners to my booth: my Quebec accent or the Speed run mode of Light Fall? Alas, we will never know! One thing is certain though, the French speed runners absolutely loved their experience with the game. RealMyop, Speed them All and many others will keep an eye out for the game and are eager to share their feedback if needed. Good news for everyone, right?!

My pilgrimage: success or failure?
Only time will tell, but the reactions from the public and the press was honestly outstanding. I didn’t expect this at all, I’m usually not the guy who handles the press so I was going in blind. Overall, the event organizers and the indies were all extremely welcoming and helped me survive this gruesome exhibition schedule! Shout-out to the people of EpicBob, Eode Group, RuffleRim, Wako Factory and all the speedrunners! A very bright and amazing indie community resides over there.

As of right now, I can definitely say: Mission accomplished and until next time Stunfest!

In categories Casual, Game Jam, Talking with no comments
← Previous Page
Next Page →